Easy but takes some time

Smashed potato salads are my new thing. It started with cooking up some smashed potatoes on the grill, and then I got to thinking these amazing, garlicky, crispy-but-tender, smashed potatoes would be a great starting point for a salad. So I began experimenting by layering smashed potatoes, a little protein, lettuce, vegetables and maybe a sprinkling of cheese, and was really wowed with the results.

Delicious, economical one-dish meals with all kinds of possibilities

Smashing the potatoes is fun. Just don't get too carried away and over smash them. Put the cooked potatoes on a clean dish towel, cover with more dish towel and use the heel of your hand to smash down on the potatoes until they are about 1/2" thick. You will feel the potato give way as you press down. The goal is for the potato to stay roughly intact, but if you lose a few bits don't worry about it. Go ahead and grill the bits too.

I prefer to grill the potatoes, but you can also roast them in a hot 450 degree oven for about 20 to 25 minutes. If you grill them you will need a grill pan like this one.

A word on potatoes

Potatoes get a bad rap for their high-glycemic load. There is a lot of great nutrition in a potato, and there are several tricks to reducing their glycemic load. This recipe uses all the tricks. See my post on 10 ways to reduce potato's glycemic load for smart tricks that make potatoes not only healthier, but more delicious.

You can cook the bacon on the stove, or use Sue's company bacon recipe to cook the bacon in the oven. Sue sprinkles her bacon with a touch of brown sugar. Bacon tastes great this way, but you can also cook bacon in the oven without the added sugar. Oven-cooked bacon is so much easier and less messy. In fact, I never cook bacon on the stove anymore. Author Something New For Dinner

Grilled smashed potatoes are the underpinnings of this one-dish meal. Layer bacon, lettuce, tomato, avocado and crumbled blue cheese and finish with a squeeze of lime. 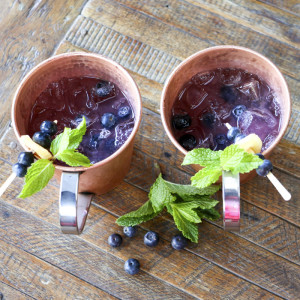 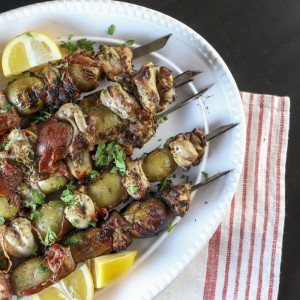