Medium skill but takes some time

I had never heard of maqluba until I spotted it in Ottolenghi's Jerusalem cookbook. This layered vegetable, chicken and rice torte is a traditional Palestinian one-pot meal that means "upside-down." I think of this maqluba recipe as a savory pineapple upside down cake, but made with chicken, tomatoes, eggplant, cauliflower and rice. Maqluba can also be made with lamb, beef or eliminate the meat for a vegetarian dish.

My family really enjoyed this dish. The maqluba is seasoned with an array of spices including garlic, turmeric, cinnamon, allspice, and a middle eastern spice blend called baharat, which includes ground coriander seeds, cinnamon, cloves, allspice, cumin seeds, cardamom and nutmeg. You can purchase baharat at Middle Eastern markets or online at Amazon or the Savory Spice Shop. This is not a light meal, but one that you will enjoy on a cool night after a hard-working day.

Inverting the Maqluba Can Be a Challenge

I had my husband and son invert the maqluba while I snapped a few pictures. If you are using a heavy dutch oven, which I recommend, inverting the maqluba is a challenge, and not a one-person job. Ottolenghi recommends you wait three minutes before removing the pan after you invert it. Sami Tamimi says all family members must rest their palms on the inverted pot for three minutes to get the best outcome. Don't worry if your maqluba doesn't invert perfectly. If it does, you are more talented than I am! And perfect or imperfect, your maqluba will be delicious.

Please note there are some differences between the pictures and the instructions. Follow the instructions, not the pictures. The eggplant should be sliced in circles not lengthwise as shown. And the eggplant should be the second layer, after the tomatoes, and not after the cauliflower as shown. None of this is critical, but it makes for a nicer presentation.

This is truly a one-pot meal. Serve with herbed yogurt and cucumber sauce. The cool, tart sauce contrasts nicely with the savory maqluba. It takes a little time to sauté the chicken and fry the cauliflower and eggplant, but once assembled, you have a complete meal-in-a-pot.

For this recipe, I did not stray far from Ottolenghi and Sami Tamimi's recipe. In the future I think I would try changing a couple things. Instead of frying the cauliflower and eggplant, I think I would roast them in the oven. This would accomplish two things: 1) It would reduce the time it takes to make the dish, 2) It would use considerably less oil. You could also play with the spices a bit if you wanted to.

Please let us know if you try an alternate method for your maqluba. A Middle Eastern vegetable, chicken and rice torte, that translates to “upside-down.” Think of it like a savory pineapple upside down cake chock full of tomatoes, cauliflower and eggplant. 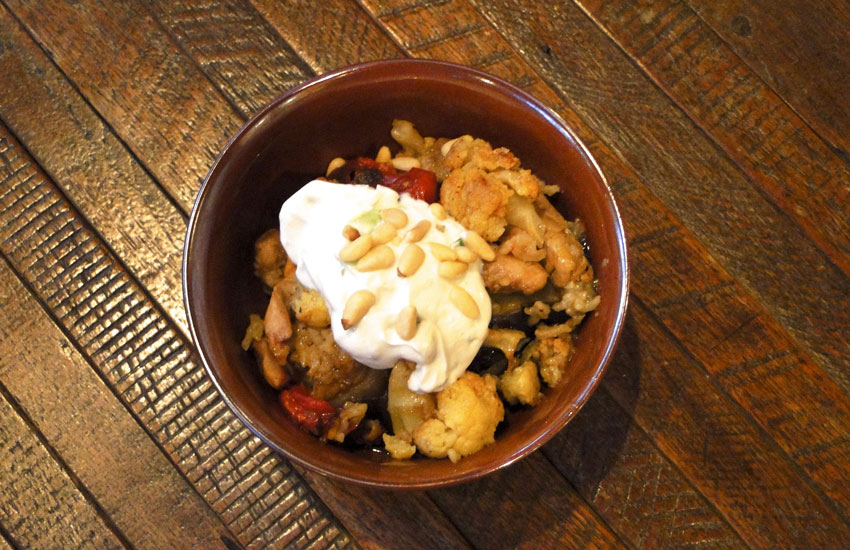 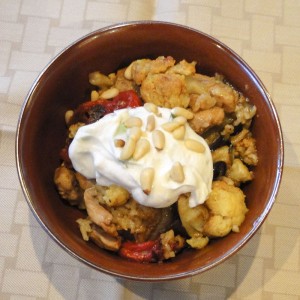