Easy but takes some time

Grilled Octopus is Easy and Delicious 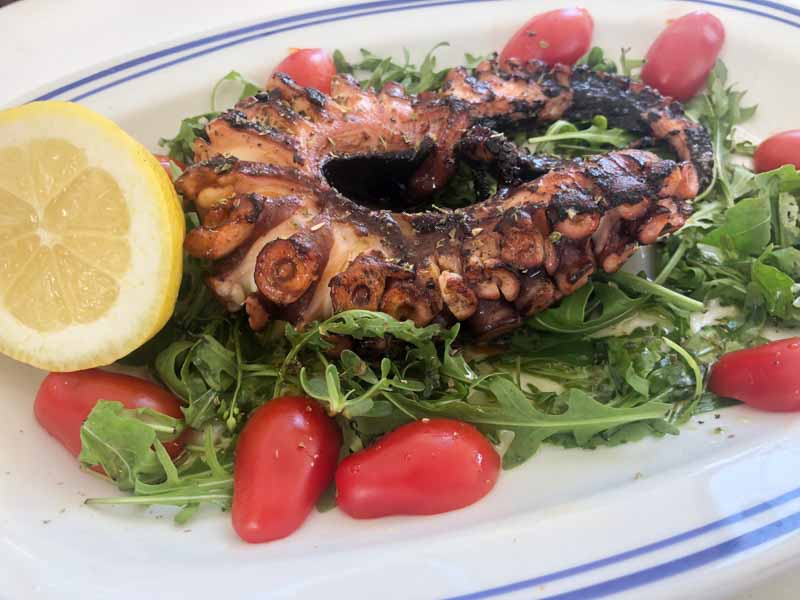 I fell in love with grilled octopus last summer when I was in Greece. We rented a boat with three couples and cruised the Saronic Gulf. It was a fabulous experience in so many ways, but we particularly enjoyed exploring the islands and finding new tavernas (small Greek restaurants) for dinner each night. Grilled octopus was always on the menu and I dare say we ordered it every night. Here is my seared octopus recipe so you can enjoy this Greek dish at home.

There is No Reason to Fear Octopus! For most Americans, the idea of cooking octopus sounds challenging, unsettling and plain old scary. Fear not, cooking these cephalopods is not hard and makes for a fun group activity. This octopus recipe is almost foolproof if you follow my instructions. I provide two different ways to tenderize it; both work beautifully.

How to Buy Octopus Look for whole, frozen octopus. A good fishmonger can find one for you. I purchase mine at Santa Monica Seafoods in Costa Mesa, California. A whole Spanish octopus will typically weigh between 4 and 7 pounds. They are cleaned before frozen, but will include the head and the beak. (More on that later.) A 4 - 7 pound octopus sounds like enough to feed an army, but they shrink a lot. Once prepared it will provide an appetizer quantity for eight or dinner for four. These octopus are not inexpensive. Plan on spending $55 to $70 for one 4 - 7 pound octopus.

The good news is that most octopus you buy in the US will be frozen and cleaned. Thaw the octopus overnight in the fridge. Now comes the part where you need to get over your squeamishness. You need to remove the beak. Yep, the beak. It is the only hard part of this gelatinous creature. The beak is located inside the octopus mouth and is used to cut into its prey. I start by cutting off the octopus' head, which is really just a thin, empty balloon-like sack. I've read the head can be eaten, but I have not done so yet. Lay out the octopus and cut the head off just above the beak. I then use my knife to make the small hole where the beak was a little bit larger. Later I will use this hole to thread the end of a wooden spoon through so I can dip the octopus in a hot pot of water. With the head removed, find the beak and push it through the flesh. It will literally pop out.

This step is a crowd pleaser. I use the Spanish method of cooking octopus that calls for dipping the octopus in the water three times. This may be a bit more tradition than science, but it does work and if you have an audience while you are cooking they will love this step. Simply bring a pot of water to boil, thread the wooden spoon through the hole where the beak was and dip it in the water for a few seconds. Pull the octopus out of the pot and you will notice the tentacles have curled up nice and cute. Dip the octopus two more times.  Each time you dip it in the water the tentacles will curl up a bit more. Now your octopus is ready to tenderize.

No one wants to eat chewy octopus and there are a lot of ways to tenderize it. The good news is that if you are using previously frozen octopus, the tenderizing process has already begun. Tenderizing happens differently in different cultures. In Greece they hang the octopus in the sun to dry. As you stroll down the street you will see octopus hanging out in front of many tavernas. Other touted methods include beating it with a rock, cooking it in a copper pot or massaging it with a daikon radish as they do in Japan. The method I recommend is cooking it low and slow either by braising or cooking it sous vide. Both methods are included in the recipe below. 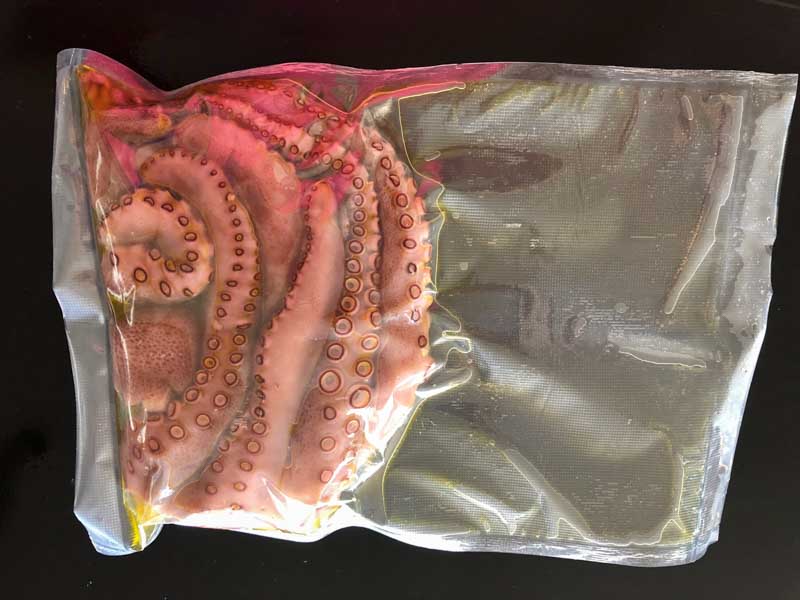 The sous vide method results in extremely succulent and tender octopus. Prepping for sous vide takes just a few minutes, but it takes four hours in the sous vide bath. The good news is this is all hands-off time and the results are phenomenal. Braising also results in tender and delicious octopus. It requires a few more ingredients, but takes only about and hour and a half on the stove. The results are also very good.

When it comes to cooking octopus there is a lot of folklore, here are three of my favorite:

Many Mediterranean chefs, including Mario Batali, swear that putting a cork in the pot helps to tenderize it. Some call for a single cork and others a handful of corks. I have researched this and have found no compelling reason for it. It may just be a good excuse to open a bottle of wine or two.

Jose Andres says cooking octopus in copper results in a chemical reaction that turns the octopus a beautiful red. This can be accomplished by cooking the octopus in a copper pot or by throwing a few clean copper pennies in the broth. I have added pennies when I braised my octopus for fun and have used a copper pot to curl the tentacles of the octopus. I'm not sure it made a difference.

Now this I do, but the purpose may be as much for drama when cooking for an audience as for actual purpose. The tentacles do curl each time you dip it, but it is possible they'd curl up if you just threw the octopus in the braising pot too. Definitely something to test.

To Remove the Skin or Not

When the octopus is done tenderizing, either by braising or cooking sous vide, the skin will be slimy and will easily come off when you touch it. Some cooks advocate removing the gelatinous skin completely, others are adamant that the gel is flavorful and should remain on. I take a middling approach and rinse off a good portion of it by rubbing it lightly under water or with a paper towel. One of these times I will leave it all on before I grill it and let you know what I think.

Grilling the Octopus to Finish Once the octopus is tenderized it can be seared immediately or placed in the fridge for a day or two until you are ready to serve. The key to making a great grilled octopus is to dry it well before searing, just like beef, chicken or fish. If you leave moisture on the octopus it will not develop a good sear. You can sear octopus on the grill or in a grill pan on the stovetop.

What to Make with Grilled Octopus?

I like eating grilled octopus very simply like the Greeks do with a little olive oil, lemon and salt and pepper. You can add it to salads, serve it with a sauce or create a number of different dishes. For me, simple is best as I really enjoy the flavor of the octopus and don't want to confuse my taste buds by adding a lot of other stuff.

Octopus provides great nutrition. It is very low in fat and high in protein. Three ounces of cooked octopus contains about 140 calories and 25 grams of protein. It is rich in B12, copper, selenium, iron, B-6 and omega-3's.

When I learned how incredibly intelligent octopus are I became a little queasy about eating them. Then after doing some research, I also learned octopus are carnivores, and some are cannibals. Some female octopus actually eat their mate after sex. Not joking. So now I put all this information into perspective and consider it OK to eat octopus. What do you think about eating grilled octopus?
Print

Grilled octopus is surprisingly simple to make. The key is tenderizing the cephalopod before you grill. This recipe provides two methods: sous vide and braising. I walk you through the preparation step-by-step, including removing the beak, curling the tentacles and tenderizing.

If you buy frozen Spanish octopus they will be cleaned and ready to cook with the exception that the head and beak still need to be removed. Thaw in the refrigerator overnight. Slice off the head and remove the beak as shown in the headnotes of this recipe.

To curl the tentacles:

Both the sous vide method and the braising method start with curling the tentacles.

Bring a large pot of water to boil. Thread the handle of a wooden spoon through the hole where the beak was. Lift the octopus over the pot and dip it into the boiling water for about 10 seconds. Pull it out and repeat two more times. The tentacles will curl up a bit after each dip.

To tenderize by braising:

Note: if you want to add a clean copper penny do so when you add the water. This traditional method is supposed to aid in tenderizing and also give the octopus a deep red color.

To tenderize by sous vide: 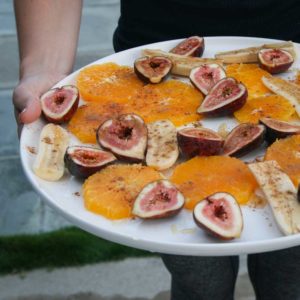 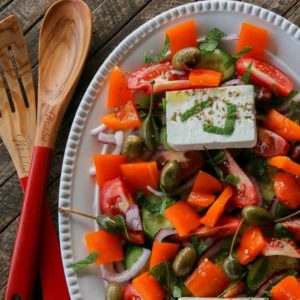 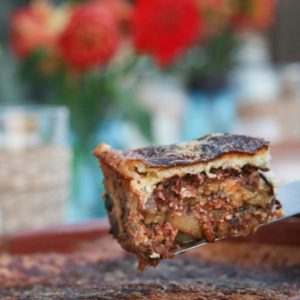 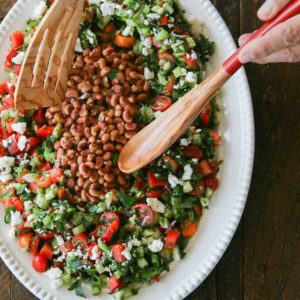